HISTORY OF THE DELAWARE HOSE COMPANY NO. 2 TONAWANDA, NY

The Delaware Hose Company is the natural and ardent expression of civic pride and patriotism of a large number of citizens of Tonawanda. The motto “Ever Ready for Duty, Always Eager for Fun” has long been a banner around which many of our best men have rallied to preserve and protect the lives and property of those they hold most dear.

The site at 21 Delaware Street occupied by the Delaware Hose House was first used by the old Citizen’s Hand Hose Company , to which some of the present members of the of the Delawares belonged. They were proudly proclaimed in the Village of Tonawanda, and were popularly known as “The Citizen’s Hose Boys”. For about a year they rushed to all of the fires with their old style hand pumper, which required the effort of fifty to sixty brawny men to adequately supply two lines of hose with water. In parades they wore straw hats and white shirts.

The hose for the hand pumper was hurried to fires by the Bliss Hose Company, which was also made up of many who became members of the Delaware Hose Company. Later the Village bought a steam pumper, which was christened the B. H. Long. The hand pumper was sold and the Citizen’s Hand Engine Company disbanded; but the Bliss Hose Company continued to drag hose by hand to fires on a two wheeled cart. When the mud in the streets was too deep to permit the use of the roadway, the cart was trundled rapidly along the old wooden sidewalks which were everywhere in Tonawanda those days.

On Mar 2, 1884, the Delaware Hose Company was incorporated under the laws of the State of New York and has continued under that organization ever since.

The early days of firefighting by the Delawares were fraught with hardships. The old leather hose with the brass rivets, which lacerated the hands of the firemen on many occasions, had to be washed in Ellicott Creek and laid over the roof of the house to dry before it could be properly greased and ready for the next emergency. The mud in the village streets and the lack of funds were only some of the things that harrowed the souls of the earlier members of our company. The village later bought cotton hose which helped immeasurably.

About 1900 the firemen, with the help of their wives and lady friends, raised enough money to buy the old white horse “Ben”, and the Village furnished a wagon for the use of the company.

About ten years later when Chief Milheim took charge of the Fire Department the City bought a horse. He dropped dead after a hard run to a fire and was substituted by another also furnished by the city.

During Chief Rech’s administration and in the year 1922, the Fire Department was motorized, and a Reo truck was put at the disposal of the Delawares. In 1926 this truck was displaced by a Seagrave 750 GPM pumping engine, which is a piece of excellent, modern firefighting apparatus.

No member of the Delaware Hose Company has ever failed to show his willingness to enter upon the most hazardous undertaking in the line of duty. The response of the members of this company has always been prompt and spontaneous. Many times the residents of Tonawanda and other cities have displayed their appreciation of the valuable and valiant services rendered by the Delawares. Never has this company taken a back seat for others, except as a mark of courtesy or respect to other valiant firemen, whom the Delawares always delight to honor.

The numerous parades, conventions, reunions, outings and other special social functions in which members of this company have participated, or which the company has held, during the first fifty years of existence, have always marked the Delawares as one of the best organizations of its kind, and its individual members the keenest exponents of a good time when fun was the order of the day.

May the resume of the next fifty years be as hard to write in so short a space as this has been; for many fine things which should have been said of the Delaware Hose Company through necessity have been omitted.  (The aforementioned was written by Ralph Simon for the program celebrating the 50th anniversary of the company in 1932)

During the 1930's the Delawares continued to grow and about 1936 claimed to be the largest volunteer fire company in the State of New York. The active list consisted of sixty members with a waiting list for membership. During this period a good share of the exempt members were very active in all phases of the company's activities. At every alarm of fire the active and exempt members made up a large share of the fire fighting force in attendance. The company was always well represented at parades such as the local parade and inspection held the 3rd Saturday in June, the state Conventions in the Twin Cities, Niagara Falls, Dunkirk and Rochester and every year at the Erie County Fair. After the acquisition of the yellow pumper in 1926 and until World War II, the Delawares were smartly uniformed in Yellow shirts, Navy blue trousers with a gold stripe and regular uniform blue cap. The company won many trophies during the 1920's and 30's for the most men in line and also best appearing. They once appeared in Dunnville, Ontario with their new yellow pumper at the invitation of the Canadian authorities, where they also won a trophy. Chief Rech had to go to a lot of trouble to get the truck through Customs, but the applause of the spectators along the line of march, made it all worthwhile.

The Delawares of the 1930's were a very active organization. Past Presidents and Past Foremen’s dinners were an annual affair, as was the annual Father and Son dinner. Once a year the company honored their deceased members with a Memorial Service at one of the local churches, attending a different church every year. At one time they sponsored a monthly amateur show that soon outgrew their quarters and was moved to the Riviera Theater because of the large attendance it attracted. They also put on a Barn Dance at the Armory that attracted a large crowd due to the many different entertainments that was offered. The members always looked forward to the Annual Reunion, which was held in the quarters on Delaware Street with the dinner being served in Brown's Hotel next door. Later on the affairs were held at the Elks Club in North Tonawanda, After World war II the celebration was held either at the American Legion or the Eldredge Club.

With the advent of World War I, the Delawares, "Ever Ready for Duty", became an integral part of the local war effort. The membership attended classes in firefighting as related to the war, volunteered for classes in First Aid. (An ambulance trailer was constructed and donated to the company by member Ed Struebing). Many of the members served in the armed forces during the war with a few paying the supreme sacrifice

In the mid-1930's the Delawares purchased the property where the fire house was located and at the rear of the quarters they constructed a restaurant and bar, which was opened to the public and soon proved to be a very popular spot not only for the membership but to many of the local citizens. The place was famous for its delicious roast beef on weck for 10¢ and also the 50¢ Sunday turkey dinners.

During the post war period the membership dropped off due to the many other interests, one of them being the popularity of Television. In 1957 the city replaced the old 1926 engine with a new Seagrave 750 GPM pumper. A few years later the city entered into an Urban Renewal program and in 1964 a new quarters was constructed on the corner of Young and State Streets. During the mid 1970's the old 1956 pumper was replaced with an American-LaFrance diesel 1500 GPM fire engine of the most modern design, which is a decided contrast with the original motorized pumper the Delawares used in 1926. One hundred years have brought about many changes in the fire service but one thing is still the same and that is the Delawares are still "Ever Ready for Duty, Always Eager for Fun"

Late in 1976 the Delaware Hose membership purchased a 1941 Ford 500 GPM pumper from the River Road Fire Co in the Town of Tonawanda. Through a lot of hard work it was restored and is now used in various parades in the locality.

In 1977 the city let bids for a new 1500 GPM diesel engine to the American LaFrance Co in Elmira. This engine was put into service at the Delaware Hose Company on April 1, 1978 on a temporary basis. It was transferred to the Niagara Hose Company in April, 1979. A 1979 American LaFrance 1500 GPM diesel engine went into service at the Delaware Hose on April 19, 1979.

The current 1982 company centennial year membership is 160 members, 20 of these are on the active list for firefighting and training requirements. 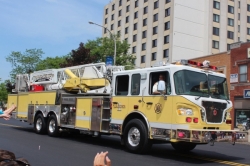 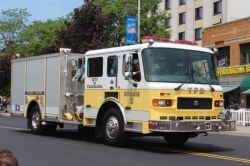 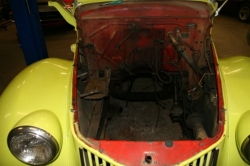 This site has been viewed 5,868 times.
News
Events
Pictures
Apparatus
Maintained by the members and staff of Delaware Hose Company #2. Designated trademarks and brands are the property of their respective owners. Copyright © 2006-2022. YourFirstDue Inc. All Rights Reserved. Content on this web site is supplied by Delaware Hose Company #2. YourFirstDue Inc. cannot be held responsible or liable for any content, text, pictures, or any other media found on this web site.
Management login
Powered by